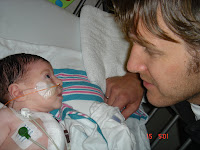 Great day here – nothing but good new to report!

Evie does not have whooping cough. Yesterday they were finally able to finish the testing and she does not have an infection. Tristan and Britain came down to charleston for the day. This was the first time they were able to be in the room with Evie so it was special for them.

Prayer requests:
1) Pray that her cough gets better. She still has coughing fits. As I write there is a respiratory specialist doing treatments on her. They will continue these every 4 hours for the next day.

2) Yesterday they switched her medication for her arrhythmia. So far this one is working well at keeping here heart rate stable. Pray that it continues to work. We will have to keep her on this for at least one year. At this point it does not appear that the arrhythmia will go away as they had hoped. If it does not go away she may have to have a procedure done on it when she gets older.

3) Yesterday the surgeon took another look at her chest incision. The wound has split open in multiple places and doesn’t seem to be healing, but the good news is that it’s not infected.

At this point they are talking like we may be able to go home in a day or so. Scary but exciting that this part of her recovery is almost over.

C leaves for Ukraine this Friday. Pray that Mandy would have peace of mind as we return home with minor issues that will be Evie’s life for the next year or more. (ie. cardiologist visits, arrhythmia issues, etc.)

Thank you all for your prayers during these very eventful first weeks of little Evangeline’s life.

“My eyes are ever on the Lord…turn to me and be gracious to me, for I am lonely and afflicted;
The troubles of my heart have multiplied!”
Evie’s persistent cough had become more severe and led the doctors Friday to run more tests to rule out RSV and Pertussis (“whooping cough”)…both highly contagious and dangerous viral infections…especially acute in infants. The RSV results thankfully came back negative, but the lab will not process the Pertussis culture until Monday, so we are left to wait and wonder…and pray!
It is easy to become overwhelmed by the plethora of information the internet offers and the temptation to self diagnose.  However, we know that our God is bigger than the statistics.  He who can calm the wind and the waves can certainly see us through this storm and we feel that peace when we choose to look to Him rather than the situation!!
They made the decision to move us to a regular recovery room upstairs out of ICU on Friday afternoon.  Part of this (we feel) is precautionary to prevent the spread of infection throughout the ICU if Evie were contagious.  Regardless, it is great to have our own space without a dozen other patient’s monitors beeping and blinking and alarming around us…and up here we get to hold her whenever we want!!  Our room has  a cot which allows Mandy to spend the night with Evie.  We’re in a “quarantine” room and our attending doctors and nurses wear masks, plastic gowns and gloves when they come in the room as “precautions”…a bit reminiscent of ET. 🙁
The heart arrhythmia remains the most prominent concern.  Evie had three bad episodes yesterday with her heart rate spiking at 220 bpm. lasting as long as an hour and a half.  “Natural” methods to break the arrhythmia (such as pulling the baby’s feet above her head or placing a bag of ice across her face) to “shock” her heart back into a normal rate proved futile.  Medication was given to stop the short circuit and regain the natural rhythm.  While the doctors assure us that these are not uncommon events for a post-op heart patient, its very disconcerting for us!  They are trying a second medication that we hope will stabilize her rhythm and eliminate the episodes.
On a brighter note, Tristan, Abi, Britain and Izzy spent a couple hours at the hospital yesterday where there is a terrific atrium with fantastic play equipment…a play kitchen and doctors office…cars & blocks…arts & crafts…video games…library and such.  Had a great time playing as a family.  The kids left this morning in 2’s to go to different grandparents houses for the week…probably harder on me than on them:-)   We’re missing stability of our family being together and a “normal” routine…….though Im not even sure what that looks like anymore!
I stand in awe at the Lords sweet presence throughout a storm that I would never have thought I would sustain.  This is not a trial I would have chosen, yet there has been such a bitter-sweetness in seeing the m
Pray:
-that the arrythmic episodes would subside
-that the pertussis results would come back negative and that she would quickly heal from whatever is causing the cough
-for our family as we’re apart this week

We were told this morning that we would “graduate” out of ICU to a
regular recovery room. Throughout the morning however, Evie had
several episodes with the arrhythmic heart beat that they detected a
couple days ago. They performed an EKG when her heart rate elevated
above 215 bpm. Her heart is essentially “short circuiting” and
causing it to “fire” offbeat. They gave her medication to reset her
heart which got it back on track. Throughout the day she’s had
several incidents when they’ve used different methods to reset the
heart rate.

Another concern has been her calorie intake. Its hard to measure how
much breast milk she is getting and she’s pretty averse to the bottle,
so they reinserted the NG tube to feed her through her nose into her
stomach. Half way through the feeding, she started choking and
gagging. We asked them to stop the feed and give her a break. As
soon as she settled a bit, they restarted the feed and apparently
topped her off. She was given too much at once and started vomiting
and the concern now is that perhaps she aspirated some into her lungs.

They still were willing to move us to regular recovery where we would
be under close observation. The nurses packed up her little crib with
portable oxygen and monitors and started rolling. We made it all the
way to the exit door of the ICU when Evie’s blood oxygen levels
dropped to a level that they were concerned about. We were wheeled
back to our spot in the Intensive care Unit where she remains under
observation.

We can look back over this whole saga and see a glimpse of Gods
eternal perspective and split second timing…Izzy’s complications at
birth that led us to come back to the US to birth Evie…Her being two
weeks post date, allowing her gain weight and be strong for all that
would transpire in her first days of life…prompting to take Evie to
the ER two weeks ago when it would have been easy to wait till
morning…C changing his ticket so that he was not back in the
Ukraine when all this happened…

..all of this gives us assurance that God is indeed in all these
details and the timing and our trust in Him is being stretched again
to see His plan even when it doesn’t coincide with ours. Please keep
praying for our little girl!