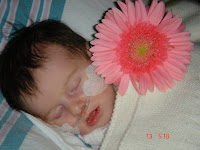 Today is indication of the power of prayer! Yesterday was rough!

Feeling like we can finally breathe the preverbal “sigh of relief”. While the surgery itself was a huge hump to get over, the two weeks since then have been an emotional roller coaster with sickening twists and turns. Today’s the first day we’ve been able to look at her without a lump in our throat and constant reminder that she is hanging in the balance between life and death. Its been a real lesson in giving our daughter back to God and trusting Him for every minute and every breath!

After a very sedated but restful night, Evie woke with the same chronic coughing this morning. During the Dr. rounds this morning, they decided to remove out her pacing wires. After surgery, they attached tiny “defibrillator” wires to her heart that they typically pull just before discharge from the hospital. Since all the breathing treatments have failed, they wondered if perhaps the wires were causing just enough irritation to make her cough. Amazingly, since removing the wires, she has not had a single coughing fit. Doctors are baffled, but ecstatic that the symptoms seem to have subsided! She still has drugs in her system, so we’re anxious to see as she comes out of that, how much of her cough is suppressed or actually healed…continue to pray!! She is peaceful, tired from fighting the last couple days, but resting sweetly now!

PRAISES
An ECHO of the heart indicated that it is healthy and there is no bleeding from the wires being pulled.
Mandy is breast feeding intermittently between drip feedings through the NG tube and Evie’s now tolerating the feeds and not throwing up.
Evie is gaining back the weight that has been drastically dropping the last couple days.
Risk of running on a bypass during surgery is hearing loss – Evie passed the hearing screening today.

PRAYER
Running blood tests to identify infection causing fever in her system
Still some atelectasis (collapsing) of the lungs that needs to heal
Concern about the healing of her incision
They will begin weaning her off some of the drugs tonight…continue to pray she doesn’t cough anymore
C flies to Ukraine tomorrow to wrap up our life:-) Pray for all the details that entails…many!!

Keep holding us in prayer and rejoicing with us for this little girls life!
C, Mandy and Evangeline

Tristan & Britain came to visit today….very interested in Evie’s wires and cool monitors and her big boo-boo! Tristan wanted to know “why does she look smaller now than when she came out of mommy’s tummy”? So observant and concerned! She’d better bulk up before she comes home as #5 in the pecking order at our house:-) Praising the Lord for a healthy heart for this little sister’s first Valentines Day! 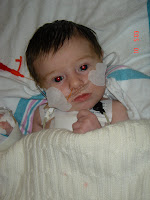 As of this evening there’s not much in terms of “answers” to report.

From 5am this morning till 5pm this evening Evie slept maybe 10 minutes and spent most of the time in coughing spasms. Needless to say both mother and daughter are exhausted.

It’s quite interesting when every Doctor and specialist you talk to is baffled by her condition and concerned by the severity of her coughing fits.  We just met with a Doctor that saw her through the Intensive Care process and he was amazed at how complex trying to understand what’s wrong with her has become.

As of right now they are working to address the symptoms;
Tylenol for her fever, 102F as of this evening
Oxycodone to help knock her out
Tylenol w/ Codeine for the pain-and to knock her out.
Propranolol (beta blocker) for her arrhythmia
Adavan (baby Valium) to help relax her
Lidocaine to numb the esophagus in hopes of alleviating the cough
3 other medications to treat possible reflux (precautionary)

As you can see all we know is that she’s the happiest when she’s not awake.  Every time she’s awake she has coughing spasms, burns too many calories, throws up her food and her medicines.  Please pray that tomorrow will be more eventful in finding the source of Evie’s discomfort.

Thank you all for praying and lifting her up.  We rest in knowing that there is One that understands every inch of her body and is in control.

Yesterday they wanted us to leave and have tried multiple times to push Evie along the road to recovery.

All day yesterday they did breathing treatments to try and open up her airways and get her to expel whatever is causing this cough.  Last night they tried Abuterol treatment which initially worked well but over subsequent treatments had less effectiveness.

As I write we are sitting waiting to be taken down for another chest x-ray.

What we know:
1) She has a persistent cough that both respiratory therapists were very concerned with over the last 24 hours.
2) She began running a fever last night at about 101F.
3) She’s continuing to lose weight despite Mandy’s feeling like she’s eating well. (experience with 4 other breast-feeders) She lost 3 ounces in the last 48 hours.  The respiratory therapist thinks its probably because she’s burning more calories from the cough and not thriving.

Please be in prayer that the medical staff will be able to identify or treat the symptoms.  This cough has seemed to elude everyone since she first came here.  All along they have written it off as just a cold though several attempts have been made to identify a viral infection of some kind.

Thank you for your continued prayer and support,