This One Horse Town

Only in this one horse town do bank robberies go down like this…
A woman at the drive through window saw suspicious activity inside the local Wachovia and promptly called 911 to alert the authorities.  All two squad cars were sent and they roped off a crime scene perimeter cautioning pedestrians to stay behind the yellow line.  Since the fire department is next door, they were on the scene immediately.  Dogs were brought in and the SLED team arrived.  With all the players in place, SLED kicked in the door prepared for the worst.  Upon entry, the bank manager was quick to assure them that all danger was at bay and everyone inside was safe.  Apparently while “Barney Feif” was “securing the perimeter” the masked man, cash in hand,  slipped out the back door.  The authorities ordered their team expand the perimeter, but since they only have two squad cars, they were limited to blocking only two roads leading out of town.  The suspect remains at large.
True story.  Our town.  I kid you not!
We concluded our time in Atlanta celebrating my little sisters graduation from highschool.  God has great things in store for her and Im so excited!  I love graduations.  So much ambition.  So much potential.  Hard to believe its been 10 years since mine!  What a decade its been! 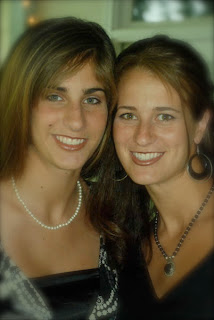 I got the fun task of decorating the cake for her reception.  Its something Ive played with for years and though Im far from an expert, I was surprisingly happy with this one.  I call it my “Hybrid Design”  A sassy cross between Mary Engelbreit and The Devil Wears Prada:-) 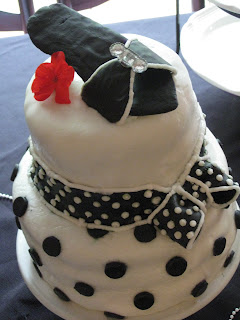 Loved our time with my family and the sweet relationships that were represented.  Evie got some play time with her twin cousins Autumn and Emma.  She really liked at last having someone smaller than her whom she could pat on the head and steal toys from:-) 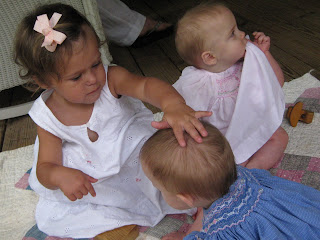 And she finally got to meet her great aunt.  A little help from chocolate, cookies and Aunt Anya’s famous “puppy chow” mix and the two were fast friends! 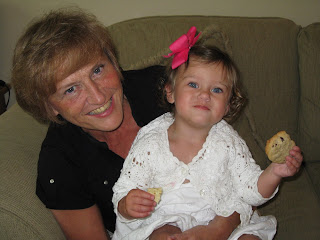