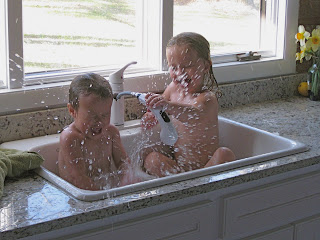 What do you do in a family with 4 girls and only one bath tub?

Simple.
Utilize the sink!!
Yesterday was Evie’s 6th and final Synagis shot of the year. We are delighted to say goodbye to RSV season. Only severely compromised babies qualify for RSV immunizations, so we’re very grateful for the doctors who advocated her heart and lung issues to see that insurance took care of her. And to the tune of $2,500 per shot, there certainly would have been no other way!
Last night was a milestone. Evie slept almost 7 hours straight. (Too bad her daddy was out of town and missed it:-) Yes, I know the Ezzo’s would raise their eyebrow at a 14 month-old who doesn’t routinely sleep through the night, but I think they need to write a sequel for special needs babies. During healing after her surgery, we were told it might not be safe for her heart to cry. Then in recent months, her reflux has caused her such discomfort that she wakes repeatedly throughout the night in pain. I know we have created a monster, but I have no regrets. I remember in PCICU after her surgery – she had not eaten in over a week and was being sustained on IV fluids and lipids. When they allowed me to begin breast-feeding again, C and I spent the night in the car in a hospital parking lot so I could go see her every 3 hours to offer her food. It was a rough road to retrain her to eat and I vowed then that I would never, NEVER complain about being woken up at night. I just wanted my baby home….beside me…begging to be fed throughout the night. So I have no complaints. 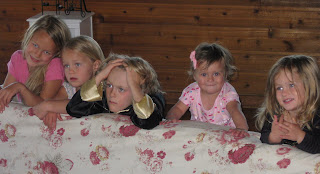 But, I do feel like a new woman after 7 hrs. of unbroken sleep!
Movie time after baths