Disclaimer:  This contains content that may be disturbing and subject matter that is not appropriate for all.  My intent is to share about the lost and hurting women trapped in hopeless situations in this city we call “home”.

To conclude the recap of “Heather & company’s” visit 🙂 I had a more somber topic I wanted to close with.
She and I took to the streets one evening to an area of town we don’t frequent… 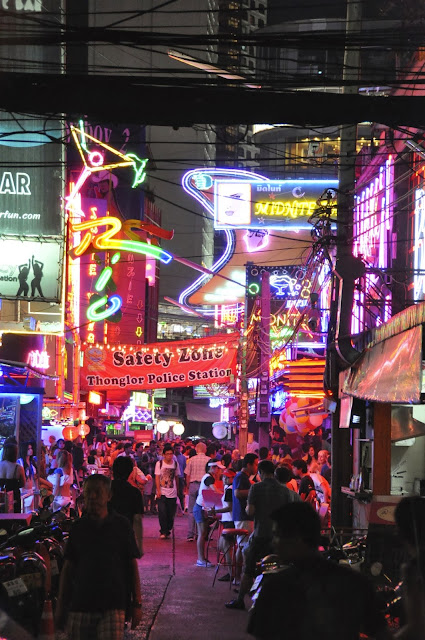 The neon glow.  The pounding rhythm of music.  The sea of people.  The pimps and the scantily-clad girls.  The foreign men.  Martini glasses.  The numbing drugs to help them get through the hours ahead.
This is where thousands of women are sold every night.

Thailand is estimated by a recent NGO survey to have between 200,000-300,000 sex workers.
That is men.
Women.
Lady boys.
And not infrequently, children!
Some are trafficked.
Some are there out of obligation.
But no one who is selling themselves or being sold actually wants to be there.
All are slaves.  All carry the weights of bondage.  Some physically.  All emotionally, and even more damaging, spiritually.

My heart has been drawn to a ministry here that offers women an alternative to working in the sex trade.  They go out on the street….into the bars…and befriend the girls.   They tell them that they are valuable.  That they are loved by God.  And that they have options.
They offer them a job making jewelry and employ them if they choose to leave the lifestyle.
They teach them life skills and work to help them begin the slow and painful process of healing and accepting that they have value beyond their bodies.  And that God can redeem what has been lost and that He loves them unconditionally.

Before coming to Thailand, I had an extremely ignorant view of prostitution.  I knew there were exceptions, but I had grossly stereotyped why these women do what they do.

I glossed over a lot and “glamorized” their lifestyles in a sense.

The best case scenario in my mind was that these were women who entertaining a Julia Roberts “Pretty Woman” fantasy.  They preyed on weak-willed men and hoped they would eventually meet a Prince Charming who would sweep them off their feet and offer them a fairy-tale ending.

The other scenario I assumed was prevalent, was conniving women just looking to support their drug habit or schmooze off of a sugar daddy to build a more opulent life.

Looking into their eyes, the window to their souls….and hearing the stories behind the mask has forced me to consider the many alternatives.
The more time Ive been around this ministry, the more stories Ive heard of the hopeless situations that force women into this lifestyle….and keep them from ever getting out of it!

~The 22 year old who lives in the outskirts of a poverty-stricken Thai village.  Despite her best efforts, she cant get a job.  Her parents put pressure on her as the oldest daughter to support the family.  To pay for the aging grandmothers medical bills.  To help put her siblings through college.  Dutifully (because it is a cultural thing), she will agree to go to Bangkok where her friend earns a decent living dancing at beer bars.

~The 27 year old wife of an abusive alcoholic.  He beats her if she doesnt bring money every night to support his habit.  He doesnt care what she does or how she earns it so long as he can buy more booze. And if she doesnt meet her quota, there will be hell to pay.

~The 35 year old.  Not as thin.  Not as beautiful.  Not as “sexy” as the 19 year old who is dancing next to her.  But she plays the part.  She does her “job” so she can support her child.  The child that an American business man impregnated her with….and promised he would help her care for.  The child he stopped sending money for 7 months after the baby was born.

~The naive foreign 18 year old.  They told her they could offer her a job in another country.  It would get her out of a life of poverty.  She just had to move to Thailand and she would be able to make a living cleaning houses.  But the people who helped with her passports and papers to get her to this country are now holding all her documents for ransom.  She has to “work off the debt” before they will allow her to leave…..but the debt just keeps mounting.

~The 20 year old.  She was molested by her uncle when she was 7.  She was gang raped when she was 15.  And her drunken older brother takes advantage of her repeatedly.  She hates herself and feels dirty.  No one has respected her.  She doesnt respect herself.  Since everyone is using her, why not get paid to do it?

Every night, women are forced to do the unthinkable.  They are sold.  They are enslaved.  They have their dignity, their privacy, and their self-worth trampled on.
Some women are told “I love you” by men who dont know the meaning of the word.
Some women are brutalized when a guy “buys” her for the night, then takes her back to the hotel where he has 5 friends waiting.
All are used and abused.

The irony is that prostitution is “illegal” in Thailand.  But everyone turns a blind eye.  So much so that there are glass windows….numbers pinned to girls bras…..and glossy laminated “menus” for what services are available.

“Sex tourism” is a huge money-maker in this city and draws hundreds of thousands of European and Western men and college students.  We walked the streets and I found myself glaring into the vacant eyes of the men we passed on the street.  Righteous indignation (or so I thought) welled up in me.
“How selfish and stupid you are!  You have to pay a girl to pretend she loves you!!”
I wanted to scream it.
I wanted them to feel the pain they inflict on these women every night by treating them with such disrespect.

But after two sleepless nights replaying the disturbing images from our walk down “Soi Cowboy”, my heart was pricked….
How wrong I was.  The girls are not the only victims.  These guys are just as lost and just as in need of Gods grace as the girls they are messing up!!  Satan has taken a stronghold on the lives of so many of these men.  These guys dont know what it means to be a man.  They substitute infatuation and lust for relationship and commitment.  A million things in our culture play into their excuses for lack of integrity and self-gratification.
They dont even know what they are missing by selling themselves short of the context for which God created and intended sex!
I began to feel compassion for the emptiness in the lives of these men that drives them to try to fill the void by settling for a shadow of the real deal.

Its an overwhelmingly hopeless situation here in Thailand.  There are organizations and ministries reaching out to these ladies, but its easy to feel like it hardly scratches the surface some days.  Seeing the brokenness in these lives utterly tears at my heart.  Ultimately its not a new job…..or a Christian tract…..or even Richard Gere riding in on a white horse that can lift these lives out of such brokenness.  It is only the redeeming work of Christ that can piece lives back together and offer hope and security.

The ministry I mentioned earlier has some amazing testimonies.  Women who have been rescued and restored.  Girls that have been healed because Jesus invaded their broken, empty, dying souls and offered life….life abundant!
These women are beginning to understand for the first time what Love is!  Sacrificial, selfless, love that Jesus offers:

1 John 3:16
This is how we know what love is, Jesus Christ laid down his life for us.

Praying for the working women of Bangkok tonight, that they will come to know this true and unconditional love…..will you join me?