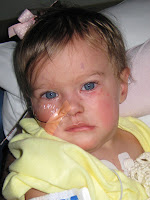 Surprised and relieved… the surgery actually went through without a hitch.  An anesthesiologist, nurse anesthetist, physicians assistant, two nurses, and two doctors (who showed this time) attended to Evie in surgery.  The doctor team met with us to confirm that all had gone well.  Her lungs look better than expected.  There is slight compression on the left side, but it is believed that this is due to her original heart defect.  Biopsies of both lungs will be cultured and should give us more information.

I got to be with her coming out of anesthesia in the post-operative care room.  She woke up throwing her weight around and promptly kicked off most of her leads and nearly pulled her PH probe that is supposed to stay in overnight.  From the probing of her left duct, she was crying blood-tinged pink crocodile tears!  Oh so sad! 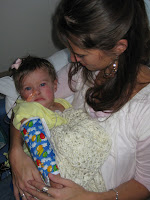 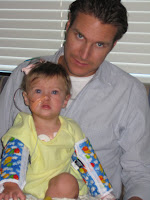 We were told to expect her to be back to herself by this afternoon, but she is far from that.  Judging from the 7 hours she has slept today, I think she’s still feeling the sedation. She is most upset about the restraints they have on her arms to keep her from grabbing the probe in her nose.  She has developed a fever which has made her heart rate spike and she’s thrown up several times.  I think we’re in for a long night.  She’s a tummy sleeper (which is covered with EKG lines) and loves to cuddle her blanket (which is impossible in this “straight jacket”). 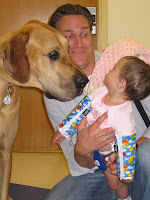 She was feeling up to a couple visitors this evening.  Levi (aka Scooby-Doo) is a “therapy” dog (a whopping Great Dane who weighs more than I do) that makes rounds in the children’s wing.  Our favorite Richland nurse Judy (who actually worked on Evie in the ICU the night we almost lost her) came by for a visit this afternoon.  The precious Butcher family brought me dinner and Wyatt was Evie’s honorary big brother tonight and even got a couple giggles out of her while playing peek-a-boo.  Grandma and Mrs. Brenda came by with a beautiful birthday balloon for the princess.  So here we sit, holding court:-) 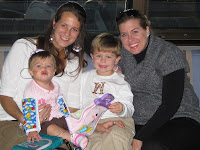 So many memories in this place…kissing her and the overwhelming smell of medical tape on her face, the constant beeping of monitors, dry hands from harsh antibacterial foam, a tangle of wires and probes that quickly form a jumbled mess and that sad little face that doesn’t understand why she’s going through so much.  What a day.
Thank you for praying her through another valley.  God has again been gracious and we have felt carried today through your prayers and support!  May her tiny life continue to bring glory to her Creator!
…and may this year be a bit easier on the little munchkin!