Homeschool at its best 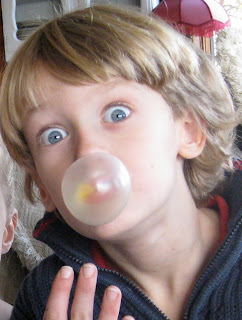 It was time for Tristan’s big quarterly review on the internet with his teacher from the charter school that our homeschool is associated with.

She began by asking him what he’d been learning in school.
My heart swelled with pride. Would he share about his new found mastery of fractions? Or about the Trojan War he’s been intrigued by? Or about his science project germinating seeds? Or would he let his little light shine and recite Proverbs 2 that we’ve been memorizing?
I waited for something profound to proceed from his mouth.
“Ive been learning about knives” he responded.
Strike one!
He had his teachers full attention now. “Oh, well tell me about that” she prodded.
It was clearly too late for me to steer this conversation and he happily proceeded.
“My mom brought me a knife from China and its really sharp“.
“From China?” she inquired. “I thought your mom was in India“.
“Oh, yeah” Tristan responded. “...yeah….well…somewhere over there“.
Strike two!
Clearly we need to brush up on our world geography skills. That same sinking feeling washed over me like the time his grandmother asked him who’s birthday we were celebrating at Christmas and he responded, “Santa Clause“. What in the world happened to all those nuggets of truth I’ve tried so hard to instill?
This would have been a great place to end the conversation but Tristan was on a roll now and had an audience to listen to his story. “When my dad gets home, my mom said he’ll go out with me and help me kill an animal with my new knife“.
Strike three!
There was an awkward silence as Im pretty sure she was jotting a note to contact social services.
What I had told him was that when daddy got home, daddy would teach him how to use a sharp object responsibly. Slaughtering the neighbors cat wasn’t exactly what I had insinuated.
It didn’t really matter that he aced his phonics assessment or that he knows most of his states and capitols. Im pretty sure the only mental picture his teacher has of my tender-hearted, blonde-haired, blue-eyed sweet boy, is a seven year old wearing a black hoodie with crossbones on the back, packing a pistol and headed to juvy.