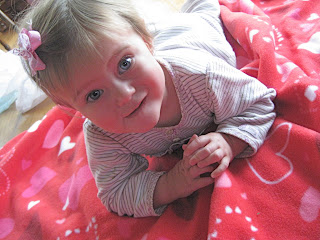 We had a terrific time with my family at the beach. (will post pictures later).
We are home for less than 24 hours to dust the sand out of our shoes and repack suitcases with ski jackets and mittens to send the kids to Grandma’s house. Quite a transition! Snow is forecasted for much of the Southeast for tonight and tomorrow, so Im skipping town:-) C has been out of the country for over two weeks. Im picking him up at the airport tonight (presuming he makes it after the 5 hour delay) and we’re headed to Charleston with Evie – another big day for her at MUSC tomorrow!
An endoscopy will be performed under anesthesia at 7:00 tomorrow morning. This will take pictures and biopsies of her stomach. Afterwards, she will have a second impedance probe threaded into her esophagus to monitor the acid regurgitation for 24 hours. Her last study showed that the reflux was so severe that her GI wants to do a second study to confirm. Pray that she will be tolerant and that the information gained will give us clear direction for how to proceed.