My love of writing was instilled by a great mentor – my mother!  A little guest post today.  She penned this and shared it with my siblings and I yesterday as our grandparents celebrated a monumental milestone. 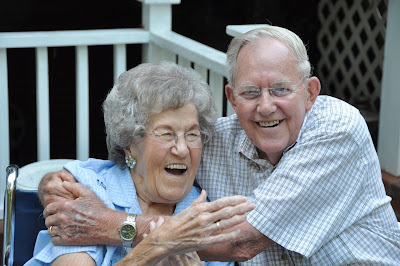 “Seventy years ago today Gramma and Granpa tied the knot, both a decision and a life-long commitment, that have literally brought all of us to where we are today. I asked Gramma last night if she was as exited as she was 70 years ago on the day before her wedding. She laughed and  shared that there had been no hoopla, no preparation really, little thought to even what she was going to wear. She told me, in fact, (we had never heard this part before), that she worked on the day they were married. When I registered surprise, she reminded me that “Times were hard then…..you just about had to.”

I study the black and white picture on the wall in the parlor, with Granpa looking very dapper in his tweed and Gramma wearing a soft-looking suit belted at the waist. He has a carnation in his lapel and on her shoulder is an upside-down corsage. (Remember when they used to pin them that way?) They are both looking very German-Lutheran-stoic, courageous and young. Certainly they were optimistic about the future, although uncertain days were looming large. The war came and went and  Granpa did, indeed, come home. Nevertheless, the happily-ever-after part did not start then….or maybe it had already begun. Maybe they decided at the time they made their vows to be happy with what life brought their way. Maybe they determined to embrace both seasons of want and seasons of plenty. Maybe they defined success by prioritizing relationships with the Lord, one another and the  people around them.

The current multi-billion dollar wedding industry stands in such stark contrast to the way Gramma and Grandpa started out. The culture that spends thousands of dollars on an event, rentals, make-up, hairdo’s, manicures and cake–only far too often to be repeated in two to five years–cannot hold a candle to Gramma and Granpa’s recipe. They are the poster children for Prince Charming and Cinderella in my book!”