Boo-Boo of a Day

Just one of those I wish I’d gone with my first inclination to stay in my pajamas, snuggle with my kids and watch the torrents of rain on the lake.
Instead I ventured out to get lab work done on baby dearest.  Back in January when she was so sick, we began seeing an Immunologist to investigate auto-immune deficiencies.  Because she was a bit anemic in January and drawing more blood would further compromise her little system, he gave us instructions to run a full blood work up on her in April.  In an effort to prevent her from being stuck twice, I have been trying to coordinate with another doctor who wanted some chromosome testing done.  After nearly three weeks, they finally got the script to our Pediatrician today for us, so off we went with both orders in hand to the lab.
Upon arrival, Crystal, (who has stuck Evie at least a dozen times) came gushing out to the waiting room, excited to see “her favorite little patient”.  Evie in recognition, stuck out her bottom lip and began climbing my shoulder and hiding in her blanket!
Poor Crystal stood dumbfounded looking at the two prescriptions I handed her.
“Thats a heck of a lot of blood to come from one little girl,” she exclaimed.
Just the reassurance every mother needs to hear.
For the next thirty minutes, I watched as she gathered every phlebotomist in the office and they conducted a lively debate about how much blood can be drawn from a 22 pound baby at one time.  She then phoned the genetics center nearby to see if there is even a panel that would cover all the blood-work that had been ordered.  They said they would research and call her back in an hour!  At this time, a consensus was made that 12-15 ml’s of blood was excessively beyond what is safe to draw at one time, and recommended that we take some today and come back Monday for more fun.
All the while Evie has been whimpering pathetically and squirming on my lap while poor Tristan loyally tried to distract and console her with M&M’s and puppet shows.  She has never been an easy stick and today was no exception.  It took forever to get the two vials filled while two nurses secured her arm and another two stood nearby shaking rattles in her face and promising her a sticker.
I mean really ladies…we are so beyond consoling her!
We left with a bruised arm, a silver glitter sticker and one exhausted, red-eyed, tear-stained baby!
…And we’ll do it all again on Monday. 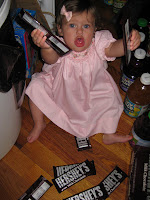 So, you can bet that when I discovered her doing this in the pantry, she didn’t get scolded.

Nope.
I sat down and joined her!