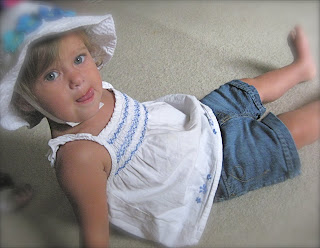 Just when I thought we were over a hump…

Evie had a follow-up with her Immunologist after that traumatic blood draw a couple weeks ago.  I walked into the office confident (for once) that all was well and there were no surprises looming.  He went through the normal niceties and asked about her health.  I raved about the corner she had turned and how healthy she has been.  He scanned her chart and raised an eye-brow.  “It seems she’s a bit of a “conflicting” patient”, he stated.  “Im glad to hear she is healthy, but her blood-work would tell us otherwise”.
After a lengthy, (confusing) conversation about numbers and counts and scientific blood functions that I don’t even begin to understand, he stated simply that he doesn’t feel we can rule out an immune deficiency disorder.  One of the tests that was run was to stimulate her drawn blood with infection.  Her’s did an insufficient job fighting it off.  More alarming, her blood couldn’t produce antibodies for some of the basic illnesses that she has been immunized against.  The Dr. ordered her to be re-immunized as a precautionary measure.
Best case scenario, her body was so very compromised and sick that it is just going to take a long time for her to build up the strength it needs.  The Dr. wants to wait a month after redoing her vaccinations and draw another panel of blood.  If the numbers do not improve, we will have to begin another battery of tests to narrow down the hundreds of auto immune disorders. 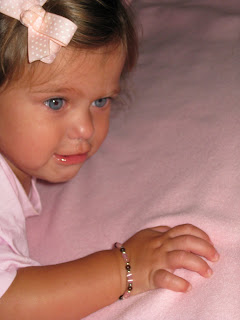 Im concerned.  Of course my heart sinks when I entertain the idea that she isn’t as healthy as I thought she was.  Its amazing how quickly you suppress all she’s endured and begin to think of her as a normal, healthy toddler.  Im concerned, but feel assured and peaceful.  God has walked me faithfully through the hardest season of my life in the past 16 months.  I know wherever He leads us, He has gone before!  There is great assurance in that!
On a brighter note, Evie has discovered FOOD!  Hard to believe she was riding the “failure to thrive” curve.  The nurse did a double take when she charted her weight.  She packed on an impressive six pounds in the last four months and has some kissable chunkey-monkey thighs to prove it!  Thanks for praying with us that her blood function will get a good report at the next visit too!

Oh, and on the subject of blood… I was putting Britain to bed tonight and applying a bandaid to a bug bite she had picked at.  “Guess why I picked my boo-boo Mommy?”
“Umm?…tell me?”
“Cause Im looking for the blue blood”.
I cracked up!  Seriously, how many four year olds know about red blood and blue blood and oxygenated blood and such.  She seriously thought she would bleed blue if she picked the right scab!  Teachable moment!