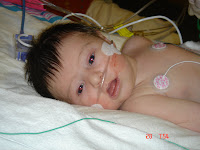 Tomorrow we are preparing for surgery.
Tuesday, 8.30am Eastern they have scheduled for the cut time.

Prayer requests:
1) Clarity, freshness, and wisdom for the doctors. There will be 2 surgeons lead by Doctor Bradley, 2 anesthesiologists lead by George Gold , 2 technicians monitoring the by-pass pump, and a team of nurses.
2) That Evie’s respiratory system would remain stable throughout the surgery, and especially the 1 hour in which they will actually stop the heart.
3) That the insertion of the 2 coronary arteries into their new positions would be successful. The coronary arteries in a baby are about the size of a tip on ballpoint pen. Dr. Bradley will have to cut new holes into the atrium and button-sew these arteries into position. As we understand this is the critical aspect to this type of surgery.
4) Also critical for Evie, typically they do this surgery on infants between 2-4 days. Evie will be 13 days old. The benefits are that she all ready has experience both eating and breathing on her own. This will be crucial as she recovers after surgery. The risk is that because her heart, in particular, her left ventricle has been pumping to just the “respiratory” of her body, it will now be tested to pump to the “body” it’s intended design but after 13 days those muscles have atrophied and become used to pumping weaker than now required. Pray that her heart will be strong enough to make this adjustment.

Thank you for the outpouring of prayer and support. It is a well needed encouragement in such a time as this to know that in numerous countries, in a multiplicity of groups and in the quietness of individuals before God, our little Evangeline is being lifted before the Heavenly Father. May this life bring Glory and Honor to His Name.