We are praising the Lord…Evie tested negative for Cystic Fibrosis! What a relief!

The procedure this morning was a bit more of an ordeal than we anticipated. Miss Priss just wouldn’t sweat enough for them to do labs on. The procedure involved probes on her arm that sent a small electrical shock to induce sweating and then they collected it on a disc device for thirty minutes. Since they didn’t have enough to work with, they had to repeat twice. 2 1/2 hours in the hospital and then another anxious few hours of waiting and we got the results from the doctor. If her numbers had been above 60, they would have re-tested or done a genetics blood-work…Evie’s numbers were 16… well in the safe zone!
“So………………what?” C didnt skip a beat.
Yes, with every “whew!!” comes a “what now?”
She will see the pulmonologist next week and discuss where we go from here and if there are further tests he wants to run.
But for now, we’re lingering in gratitude that she is not going to battle CF on top of everything else! Thank you prayer warriors!!
For those who have asked, C got out of Cuba hours before the hurricane hit. We have a couple great days as a family before he heads to Ukraine, Russia and Portugal for 3 weeks.
This picture best describes how Evie feels about cereal being added to her diet:-) 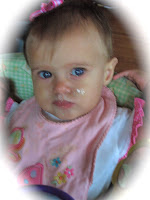