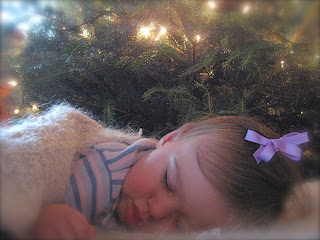 Is this beginning to sound repetitive to anyone else?
Evie has again been the object of concern the last few days.
Day 4 with the stomach flu, vomiting, diarrhea, the whole nine yards, I became worried she was dehydrated.  She was listless, cuddly and overall miserable.  Passivity in general is contradictory to Evie’s nature…she is a fighter.
She always has been.
I remember commenting last year at the end of pregnancy that she was my most active baby as she did cartwheels inside of me.  She even outmatched the twins whom I remember having knock-down drag-out in utero, jockeying for “firstborn” position.  No, Evie is by far my toughest which is how she’s survived and endured all that she has.
The last two days, Evie’s lethargy worried me.  She was refusing to eat, couldn’t keep feeds down and wasn’t having sufficient diapers.  She almost fell asleep as her Pediatrician examined her yesterday.  Typically Evie would be teething on the stethoscope.  She had lost a couple of ounces that we have worked so hard to gain.
The doctor felt she was a bit dehydrated but that the risk of exposure to further infections in the hospital did not outweigh the benefit of having her on IV fluids.  We were sent to a clinic for a blood work-up and urinalysis.  Because of dehydration, getting a veinous line in was especially difficult and it took several sticks.  Poor girl!  We’ve been pushing fluids, Pedialyte and formula drop-by-drop through a syringe trying to increase her intake.
This morning I feel like we’re getting our girl back.  She tires easily, but has been more playful.  She only woke up once throwing up last night, so hopefully we’ve turned a corner.  What a trooper!