My mother had a friend who took her three children to see a movie at the theater. During the 90 minute film, the little darlings managed to splash the contents of a large coke and spill the better half of a bag of popcorn between the two girls on either side and little Johnny sitting on her lap. This ambitious mom made it through the show. As the house lights went up and the credits rolled, she set Johnny on his feet and turned to pick up her purse only to look back up and see her toddler making his way up the aisle with her wrap-around skirt stuck to his bum!

Every mother has those moments. Ive had a few in recent days that seem blog-worthy….


My sister and I ventured out to a new church last week with all the kiddos in tow. We sat near the back so Josie could discretely whisk Evie away when she got restless. What was I thinking? Of course the child wasnt going to go passively.
Poor Josie tried to take her out of earshot, but that baby has a good set of pipes and screamed “Maaaa-maaa” at the top of her lungs.
I slouched in my chair as I began to notice heads turning. I was grateful that we were among strangers and that surely no one knew that ill-mannered baby belonged to me.
Just as the pastor led into a quiet moment of prayer, Isabelle piped up beside me….clearly audible for the entire congregation…”Mommy, I hear our baby crying“
Thanks Izzy!
I bowed my head a bit lower!


Then today.
Evie needed a routine blood draw to send back to our doctors in Columbia. After driving to the lab and realizing I’d forgotten her insurance card, I returned home to retrieve her card and made a second treck across LA in traffic. Upon arrival, we sat for two hours in a waiting room among a dozen mutually tired and frustrated patients awaiting their turn. After exhausting our supply of granola bars and cheerios, Evie was a wreck. I encouraged Abi to entertain Evie who had had it by this point. Abi dug around in my purse looking for my phone or something for Evie to teethe on. All eyes in the room were watching to see how we were going to pacify this baby who’s naptime was clearly overdue. At this moment, Abi emerges from the deep recesses of my purse in which she’s been digging. “Here Evie….you can play with this“
I heard the snickers from the room full of strangers before I even looked to see Abi handing Evie a tampon.
I had to laugh too. And Evie stopped crying!


So here’s to us mom’s. To those wonderful moments we want to remember forever….and those few we’d rather forget! 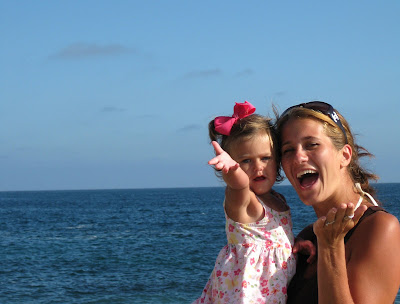