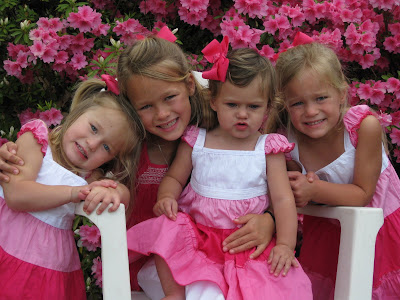 Left to right: Isabelle, Abigail, Evangeline and Britain
Tristan not pictured because of course, he doesn’t wear pink:-)
We recently analyzed the frequency of ER visit’s in a family with 5 rambunctious little ones. Like his daddy, Tristan is just prone to accidents. Bike wrecks, skate board accidents, getting “knocked out” while wrestling a bit too energetically. We had to call an ambulance when Abi was three because she ingested Drain-O and was coughing up blood and had burns all down her throat. Britain got stitches for a gash in her forehead from falling off a chair at about the same age. I got to navigate that one solo while we were living in Ukraine and C was out of town. (Imagine flagging down a taxi with a bleeding baby…. a ghetto hospital….no English speaking personnel….having my baby taken from me by a tight-lipped nurse instructing me in Russian that I was forbidden from accompanying her into the sterile room where they would stitch her without anesthesia.) And then there is Evie and all her hospital drama. Need I say more? Im feeling like such a flaky mom “confessing” all of this, but seriously, there are occupational hazards that just cant be avoided some days in this job!
So yeah, the point was that Isabelle is our only one to elude the ER thus far. Never make those comparisons…they are SURE to be tested!
Saturday night we had a young newlywed couple staying with us. The guy is a lifelong friend of C’s who was a teammate of ours on the mission field in Ukraine. He and his beautiful new bride and were visiting us for the weekend. Our kids adore them and jockeyed for positions on their lap or by their side all night. Our precious friends were nothing but gracious, but I can only imagine that our chaotic world is a pretty stark contrast to theirs. Nonetheless, I was feeling pretty confident that we had made to through the bedtime routine…teeth brushing, potty-ing, endless stories, cups of water, songs and prayers fairly smoothly. It was that “exhale” time of day when you crash on the couch listening to the sweet sound of silence and ready to engage in uninterrupted adult conversation. After three and a half minutes of peace, Isabelle began screaming bloody-murder from her bedroom. I booted it upstairs to find her bleeding from her nose and in hysterics.
“Som-ting in der Mommy!!”
“In where?”
“In DER!”
It took two seconds to put the pieces together and realize she’d crammed a foreign object up her nose. Oh GREAT! The nearby Emergency Care Clinic closes early on the weekend and the nearest hospital is 45 minutes away. You know those little plastic critters that you wind up from the back and they pitter-patter until the spring runs out? Well her little penguin apparently had gone to bed with her (unbeknownst to me) and she had broken off his beak and “tried it on”. Half a box of blood stained kleenex, a pair of tweezers and 20 minutes later, I returned to our guests politely waiting in the den. (I seriously think I’ve earned an honorary RN degree in the last year!)
Thankfully, Isabelle is none the worse for wear and Im thinking we may have a patent on a new birth control method. All you newlyweds out there, come spend a weekend with the noise and clamor and drama at our house. You’ll think twice!