I hate to be a drama queen, but…..I do believe I have become somewhat of an expert in pediatric orthopedic injuries as of late :)We currently have two kids in casts.
Such is life as a twin – you share everything! 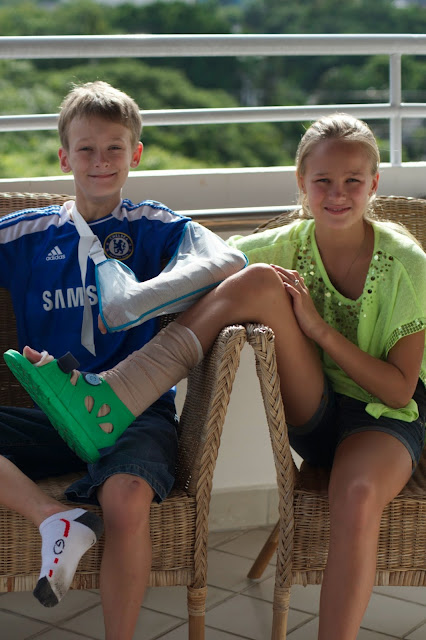 And, mere months ago, Evie was also sporting a cement cast and very fashionable purple boot.
Her story is such an “Evie-ism”……

C noticed her limping one evening and asked her what was wrong.
“Nothing” she replied with no more than a glance over her shoulder as she took off to play.

The next morning, the limp was still there.
Again she still denied that anything was wrong.

By that evening, we were horrified to see that her ankle was huge and purple.
After insisting that something was wrong with her ankle and being told by her repeatedly that she was “fine“, Izzy piped up.  “She fell off the bed and hurt it last night“.

“The bed” happened to be the top bunk bed (which she is not supposed to climb).  Thus explaining why she would be hesitant to acknowledge an injury that clearly, could not have happened if she had been obeying.

Busted!  (thanks to tattle-tale Izzy)

A trip to the hospital confirmed that she had a torn ligament and got a partial cast (and lots of doting and baby-ing) for 3 weeks.

And now early this week, Abi (possessing all the poise and grace of her mother) tripped and bashed her foot against the coffee table.
We iced it.
And sent her to school the next day.
…..They sent her home wearing an ace bandage from the school nurse.

“You’ll be fine” her compassionate mother assured her.  “Just rest it”
After all, she could walk on it.
(please no one report me to Thai children’s services for neglect!!)

Saturday rolled around and we took the family to support the school team basketball games.
Tristan’s age group was short a player, so they asked him to dress for the team.
3 minutes into the first quarter, they subbed him in.
27 seconds later, he took a foul and landed, hard, on the cement basketball court.
Elbow throbbing, he walked off the court.
“Shake it off” the coach coaxed.
“You got to get back in the game” dad encouraged.
Everyone told him it was just a bruise and he needed to move it so it wouldnt get stiff.
Whats that rule about “if you can move it, its not broken“??
(not true!)

Reluctantly we took him to the hospital….mainly out of convenience.  It was “on our way home” and easier to get it checked now than later.  After two seconds of observing him, the orthopedic speculated that it was broken.
X-ray confirmed.
Full arm cast.
Sling.
And an appointment next week to evaluate if he’ll need to have surgery to put pins in his elbow!
(most regretted 27 seconds of playtime ever!)

By this time, Im getting worried that Abi’s sore foot might not just be a bruise.
C had to take her out of church on Sunday because her pain was getting worse and she was sitting there with tears streaming down her face.
But, never wanting to be “that mom” who rushes to the hospital every time my child sneezes, we gave her tylenol and held on till Monday morning.
More X-rays.
More doctor fees.
Ca-ching, ca-ching $$$!!
Suspected hairline fracture on the side of her foot.
Yep….mom of the year award goes to me.  I let her walk on a fractured foot for 5 days!
Cast.
Boot.
Bam!

This team is down for the count!  They are falling off like flies! 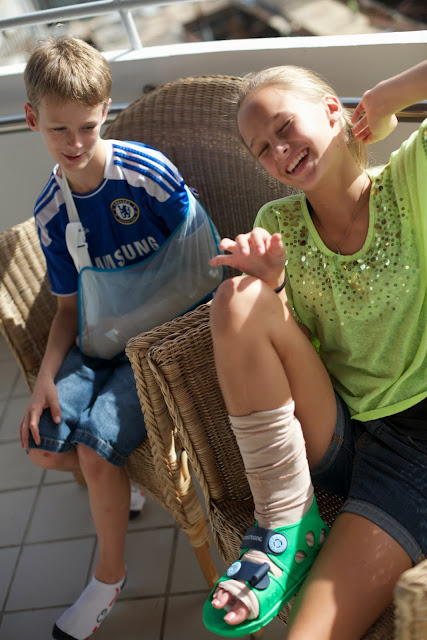