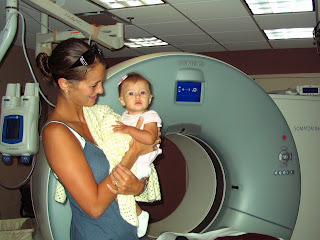 Evie is home and resting after her procedure today.

Last night she tripped her oxygen monitor alarming at only 80% oxygen. Then this morning on our way to the hospital, I had to pull the car over three times because she was throwing up and choking in the back seat. In typical Evie style, she had the hospital staff on edge and taking every precaution. Because of her history and “acting up” the last few hours, they decided NOT to use heavy sedation during the CT scan and went with a milder IV “sleepy juice”. The pediatric nursing staff in the new Richland Childrens hospital were wonderful! They were laughing at the fact that they had to “call in the reserves” and it took four of them to restrain this seven-month-old while they inserted her IV. She’s a fighter…but then we already knew that!
They let me go down to the radiation room and stay with her until right before they did the scan. Good thing too. She is such a momma’s girl and was less than cordial to the Child Life specialist who was trying to win her favor. A bit of a kink just before procedure when her IV line wouldnt flush and so they couldnt get her sedated. They had to probe around a bit and she ended up bleeding on the doctor and two nurses before they got her lines working. Because she screamed for 15 minutes during the ordeal, Im not sure if it was exhaustion or the narcotics that finally settled her enough so they could scan. Within five minutes, she was done and back up in my arms. And MAD!! They said as soon as she began stirring, she pulled the oxygen from her nose and kicked off her EKG lines. We thank God every day that she’s so spunky and tough!! 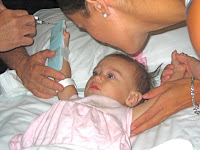 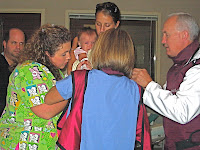 Please pray that we will get some information from the doctor who is reviewing her scan before the weekend. I will post as soon as we know something. Thank you for praying for her today!
Side note…C is in Cuba. Pray for clear communication as this unfolds and safety for him as the tropical storms move through!