My precious friend Rebecca (Annabelle’s mommy) knew that I wasn’t as tough as I’d like to think I am and insisted on going with me to Evie’s procedures yesterday to support me in C’s absence. A good thing too!
The ultrasound of her kidneys was fairly uneventful.
The cath procedure was another story. They mentioned at Admissions that they typically sedate patients because its so traumatic. Because of Evie’s complicated history however, sedation wasnt recommended for her. So she just had to be a tough girl.
After strapping her to a barbaric board on the radiation table, they tried to cath her. The Physicians Assistant quickly saw that this 18 pounder was a little spit-fire and called for an extra set of hands.
“You’re going to need it” Rebecca piped up! 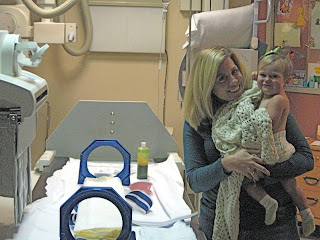 It was quite an ordeal to get it in. Evie was fighting with everything she’s got and quite frankly, was winning. Twice, she pushed the catheter out. When at last they got it in and filled her bladder, we prayed for pee so they could get the x-ray pictures they needed.
The PA remarked that in all her years of doing this proceedure, she’s never had someone fight her so hard.
That’s my girl!
Then this morning, little Missy woke up with heavy breathing…her classic symptoms of fluid on her lungs. By the time she got up from her morning nap, she needed oxygen, was running a high heart rate and had a fever of 102.0, so we headed for the Pediatrician. After 2 hours there, we were sent to a clinic to do an x-ray of her lungs and draw a bunch of bloodwork. In addition to
Pediatrician
Pulmonologist
Opthamologist
Therapist
and Cardiologist,
we are adding an Immunologist and Geneticist to her list of doctors. The work-up will go to them to begin looking for immune disorders and such. Since we didnt get to the clinic before cultures were picked up by the currier, we have do go do the same ordeal AGAIN tomorrow! Baby dearest went to sleep with a very uncomfortable adhesive baggie that is supposed to be collecting pee for the lab work. As if she weren’t miserable enough already!